As usual, when major pieces are finished there is vast hole....... This time is no different!
To help overcome that feeling I am using us a collection of unused blocks and scraps to create a very abstract geometric quilt. This is just the beginning - 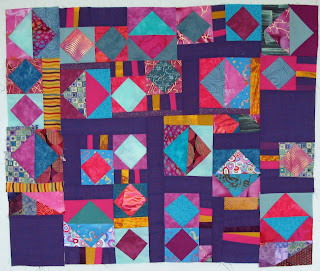 I like the use of the flashes of yellow and it will be interesting to see where this goes. If it doesn't work, I've lost nothing as they were scrap blocks anyway and it might be ok to become a Linus quilt if I can't pull something more interesting out of it!

Posted by Sarah at 14:41 No comments: Links to this post

My reward for completing all my Festival pieces with a day to spare was a trip to London to the Victoria Miro Gallery to see Grayson Perry's collection of six tapestries linked to the Channel 4 programmes. I wanted to see them before the Olympics made London totally unbearable.
I couldn't have chosen a hotter day, the walk along City Road seemed far longer than it actually was with the sun beating down!
The tapestries in real life are even more stunning than they appeared on the TV, vast, full of movement and colour such vibrant representations. Looking at them close up the referencing of religious works was more apparent yet subtle. I loved them. 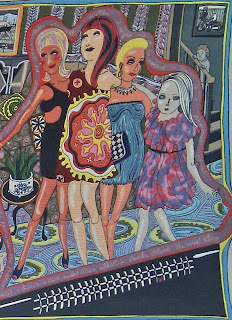 One could read more into the  fabric with the benefit of seeing the TV programmes and listening to those he met, more poignant for that I think. For me the one disappointment was that there was no handling sample, it would have been so interesting to see the construction close up, but I was reminded that this was a selling exhibition not a public exhibition!
I found myself recognising the "camp" that I belonged to but I seem to have been blessed to do without the angst!
I just wish that I had the money, and the house to own one, an investment I think. 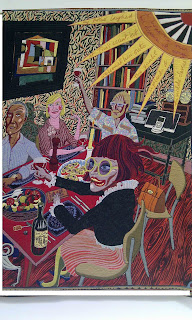 With 24 hours to spare I have finally finished this piece! Last week I had expected to have to  withdraw my entry as I had no chance to complete it...... but, burning the midnight oil it is done.
Hindsight is a wonderful thing, of course now I can see the design issues I should have solved before I ever put needle and thread to fabric but I'm a devil for jumping right in. I'm not sure I'd have made anything like this piece if I'd worked on pencil and paper before I started, it was only as I worked with the fabrics that ideas came. 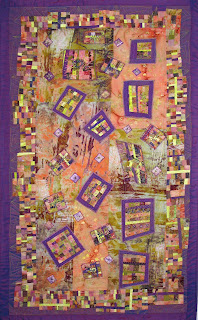 This is a close-up of one of the Gullions to give you an idea of the amount of beading I have included. 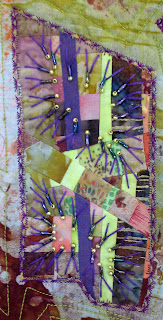 No doubt many would tell me that this is the very reason I should knuckle down and "do" a C&G course, but I've had it with jumping through other people's hoops! Perhaps a C&G curriculum without the folders and stipulated artefacts would do, but does such a thing exist?

Posted by Sarah at 10:00 No comments: Links to this post

Yesterday I went to Art in Action. The organisers were at pains to tell us that parking had been arranged on hard standing in the light of the waterlogged fields and that a Park and Ride system would be in place.
It took us nearly an hour go get from the M40 to the car park and another 50mins to queue for a bus to the show! A typically "British" queue, all good manners, grumbles and stiff upper lips! The reverse process was similarly grim as there were only 3 buses on stream during "the school run", which meant that a huge queue built up again snaking across the house and round the paths. A in A did a great job providing chairs for those who needed them and glasses of water and lemonade to keep us hydrated - it was a day without rain and some real hot sunshine.
I am still glad I went as it is such a fabulous showcase of artistic talent. I don't think that there were as many "wow" factor artefacts and artists this year, especially in Ceramics where there was a preponderance of domestic wear. Textiles was a mixed bag, again less of the "wow" - Susan Macarthur's painted and stitched figures were a feature. 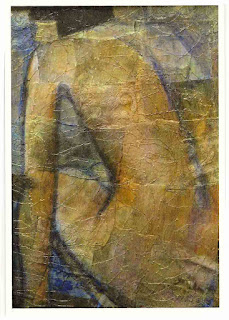 Jeanette Appleton's work was interesting, she also demonstrated, and she had some stunning small pieces for sale.
The best was a display of Sue Rangeley's machine embroidery - quite stunning, exquisite delicate work.
The "Tent Makers of Cairo" were there, lots of interest but I'm not sure if there was much selling, true in other tents too I think.
In the Commonwealth Tent Stella Xemphondos had a range of naive Appliqué and hand painted silks. 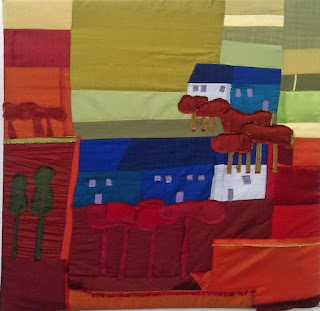 I bought bits and bobs from Oliver's Twists and Artvango but otherwise came home empty handed!
Not sure if I will make any special efforts to go again next year.

After a lot of sampling I have decided to quilt the background with small lozenges of stitching to break-up the background and continue the theme of little jewelled pieces. I may, if I have time, add beads to each of the shapes, but it can stand without them if time runs out!
Now I have to tackle the border and its very tiny patches - more trials to do before that it is resolved! I must try to have a clearer vision of the completed piece before I start the next piece!! 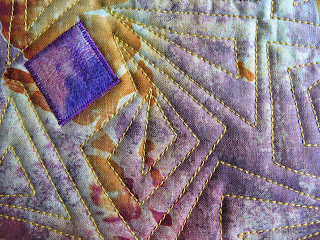 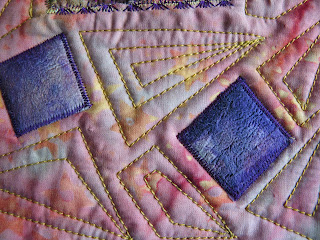 Posted by Sarah at 10:41 No comments: Links to this post

The Essence of Petra

Who would have thought that nearly two years on I would still be so drawn to the Petra images and colours?
I have now finished "The Essence of Petra", a wide and shallow piece for a change which has been heavily quilted and with some beads. I love the colours but accept that it may not be everyone's "cup of tea". It is destined for the Contemporary section at Festival of Quilts. 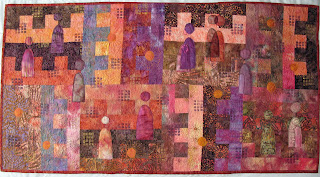 I have enjoyed the close quilting and the use of block printing this time. 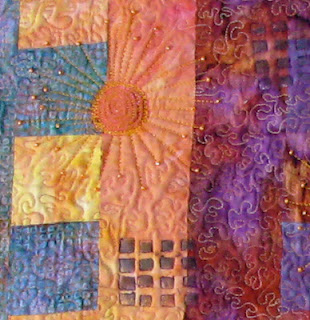 Now its back to the machine to get on with quilting the second that I had hoped to take to Festival of Quilts!
Posted by Sarah at 09:53 1 comment: Links to this post

The tennis has played havoc with my schedule so I've done less than I set out to do! But......
I have partially solved the problem of how to treat each of the small blocks of diced piecing with embroidery stitches and beads.
I think that I can work a number of variations around this theme. 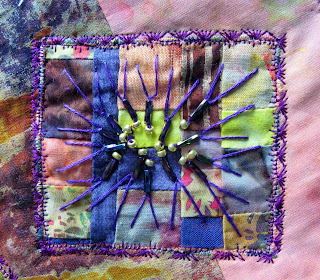 I have used the pre-set embroidery stitch around the shape as it reminded me of the settings used on rings and brooches and the large hand stitches reduce the "spottiness" of the block and give the (loose) impression of a piece of jewellery with the beads.

On another tack: I had to but some stranded cottons, perle cotton and  beads and was stunned by how much a small collection came to - the hidden cost of a quilt.

Posted by Sarah at 10:52 No comments: Links to this post

I was surprised and delighted to be asked to join "Contemporary Expressions", a small group of textile artists and quilters who exhibit nationally and internationally.
I have put a link to our website in the panel on the right where each of us has a small showcase of work and biography.
Posted by Sarah at 10:22 2 comments: Links to this post

The effort is beginning to pay off! I have now managed to construct all the little blocks that make up the border and get them attached. What I now know is that I will need to "block" the quilt once I've stitched into it to get it absolutely square.
I have raided all my threads and beads for adding surface decoration and plan to start that today. I think I will use hand embroidery and beads inside each of the gullions and machine quilting in the background areas in chartreuse yellow green to knock the orange back a little. 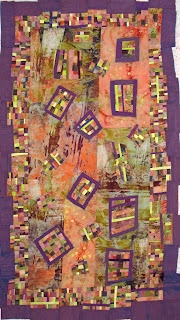 Just 13 days to finish everything!
Posted by Sarah at 10:15 No comments: Links to this post

I have tied myself to the studio table and done little else in the last few days! The main body of the quilt is done.

I am now playing with an abstract border made up of more little "Gullions"! Gullions are jewels and with beading added to this little mini quilts I think they will be quite jewel like.
Its taking a great deal of time to create all these little sections from very narrow strips of fabric sewn together, cut into slices and re-stitched in a different order! 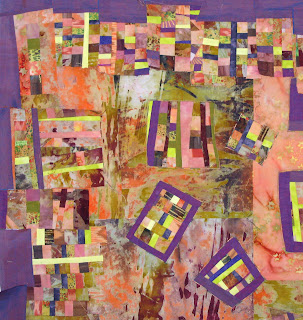 Once I've had a chance to look at the possibilities I'll go for it, just need time now for the idea to become familiar or change it!
Posted by Sarah at 14:42 No comments: Links to this post

While away in France I visited the Roman Villa site at Seviac, Montreal in the Gers. An amazing site with wonderfully preserved mosaic pavements from 1st Century AD. I was amazed at the brightness of the colours all these years later. All worked out without the tools we all take for granted.
Amazing! 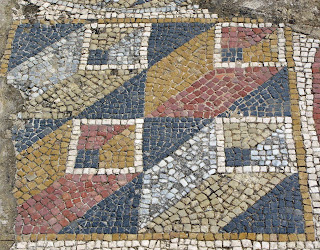 But what I was looking at was a collection of stone quilts! 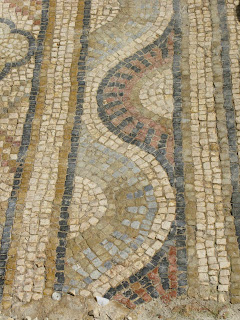 This would make a fabulous appliquéd border, so there is nothing new
Posted by Sarah at 10:49 2 comments: Links to this post

A few weeks away accounts for the yawning silence here!
Now I have to knuckle down as I have 2 quilts to finish for festival and the top is still unfinished on one of them!!!
I now have some really small little blocks to make to break up the join lines in the background fabric and lots of border pieces to do, so why and I doing this instead? Displacement activity!!!

I'm going to have coffee, then I'll tie myself to the studio desk!
Posted by Sarah at 10:42 No comments: Links to this post

Sarah
Northants, United Kingdom
I am a fabric adict. Its rare that I have more than a day away from doing something creative with fabric or thread, my passion for textiles has prompted me to set up this blog. I have become an adict gradually over the years and now I have the time to devote to my adiction. I got here through the interest, patience, understanding and teaching of a number of talented women who nurtured my skills, fed my interest and gave praise and encouragement as I developed this lifelong interest. I'm so grateful to them for sharing and for helping me understand that to make progress one has to make mistakes first and then learn to put them right. I am on a journey, beginning a voyage of discovery to develop my creativity and move my art forwards.

Easter 2014
Bramblepatch Easter exhibition
"Taking the Rough with the Smooth"
12" canvas titles "Levels" made in response to the flooding in Somerset.
Three pieces influenced by rock structures

My Reading List - don't you just love to know what others read? This is now a rolling list

Overview
I have never kept a list of everything I have read before - its quite fascinating to look back on. I was prompted to attempt the list because of a notebook belonging to my grandfather that I found when clearing my father's house. My grandfather had kept a list of his reading from 1909 to 1973 and he was a "serious" reader, reading in French, German, Hebrew and Greek as well as all the English classics and modern novels as they came out in the mid 20th century, but largely non-fiction. he was clearly a fascinating man and I am really sorry that I never got to know that side of him while he was alive.
As you can see I can't match him, but he is an inspiration when I'm stuck and I am planning a greater diet of non-fiction in the new year. What this space.